Staffan's English Blog My words, thoughts and photos from a Swedish perspective 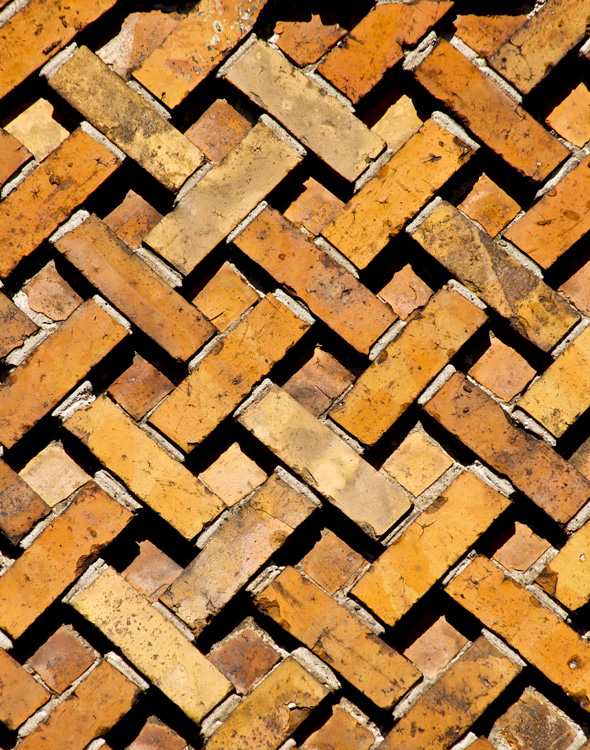 The time when sights like this were common is long gone, but the brick-layer’s skills can still be seen on this old workshop. Modern buildings never get any decorations and I think it’s a loss from an aesthetic point of view. There are a number of craftsmen out there keeping old traditions alive and they are definitely worth credit for what they do. They keep old traditions and knowledge alive and old buildings cannot only be restored, but correctly restored and that’s an important aspect that makes a difference.

PS. An overdecorated building is vulgar – not aesthetic! 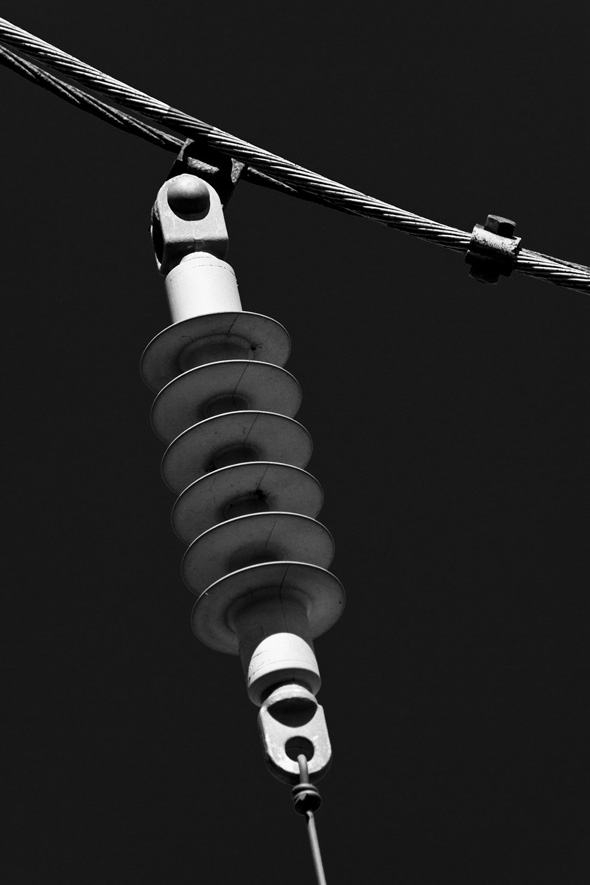 Though I’m not particularly interested in electricity, I must admit that I find many of the parts and pieces that goes with it very interesting as subjects seen with my photographer eye. 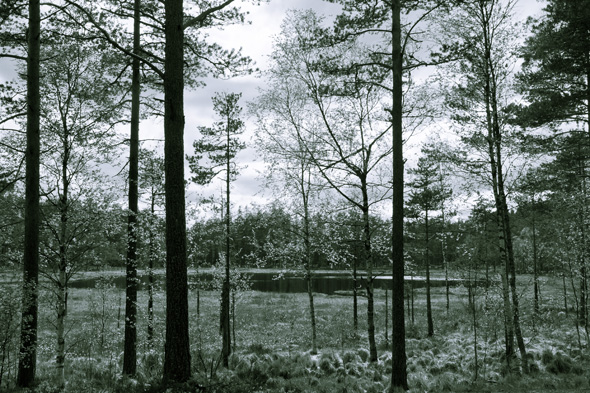 The spring is my favourite season offering the same miracle every year when the nature wakes up again. I took a trip last week accompanied by my camera and I really enjoyed being in the nature and listen to the birds, looking at the nature and so on.

Me and the silence 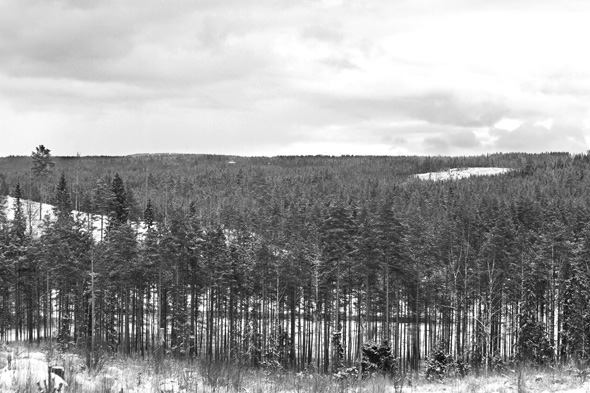 Spent last weekend in my house in Kopparberg. The weather was ok, so I took a trip in the surroundings accompanied by the camera. We had had snow during the night but we didn’t get too much snow so the roads in the forests were ok to drive on. I parked the car on different places and took walks in the surroundings. 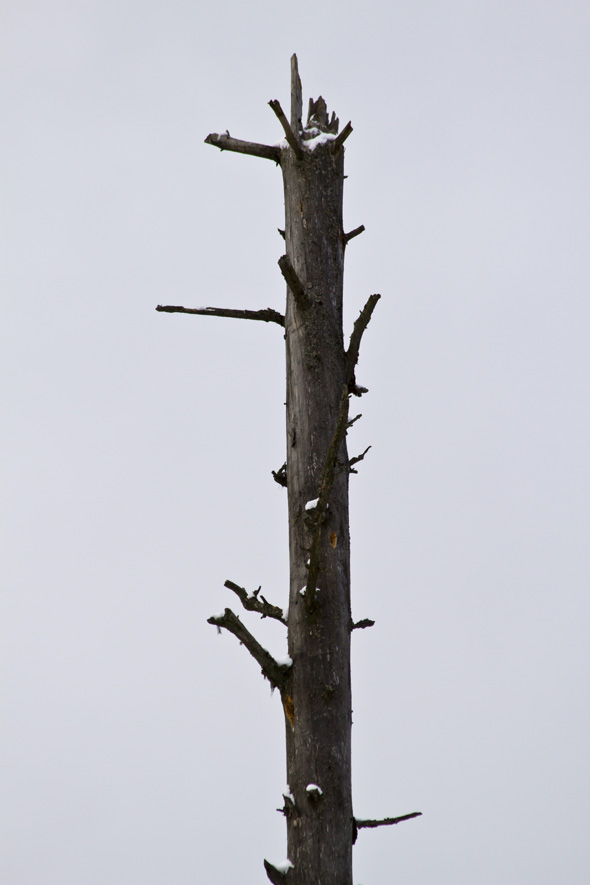 I don’t know what it’s called in English, but modern methods of felling trees means that a huge area is completely cleared. The sight is not pleasing to the eye, however they are bound to leave some remains left for certain birds and insects as compensation for the possibilities they rob nature of. These also provide interesting possibilities for photographers like me. 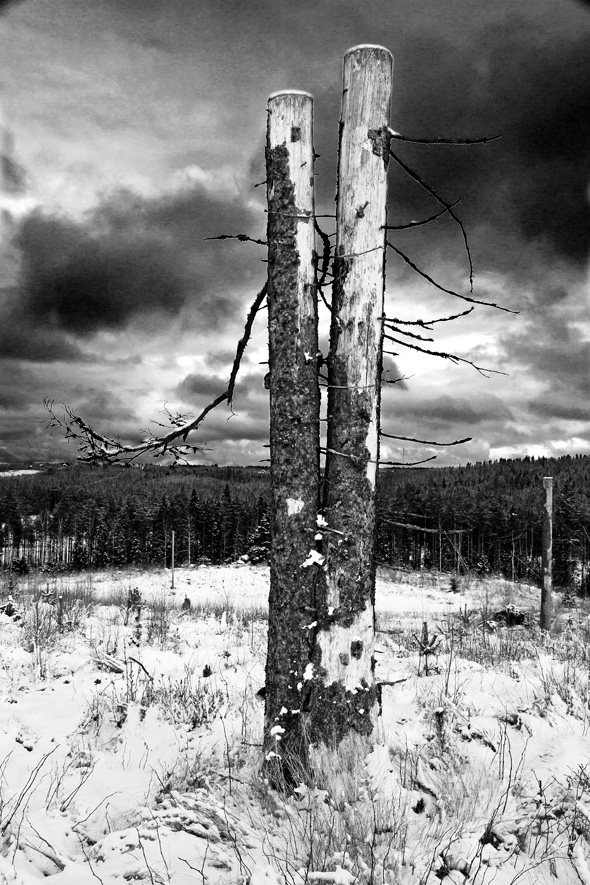 These deserted spots are usually difficult to walk on, but the snow and the cold made it quite easy. Winter has its advantages too, that’s for sure. Just add a dash of drama to the caption and you’re done. 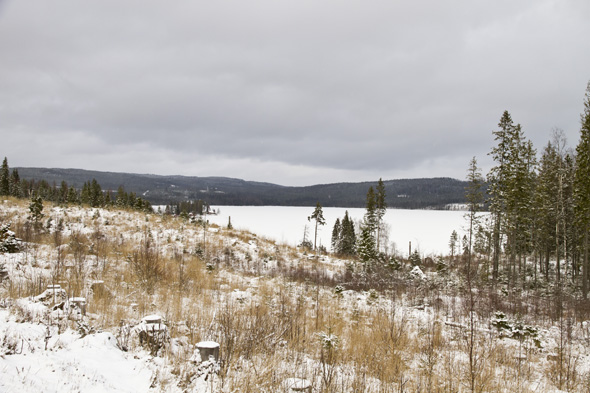 I have always lived in cities and ought to be used to that kind of life, but I enjoy the silence. There was only me, my camera and the silence present and it didn’t bother me the least. A feeling of home or belonging? I don’t know. 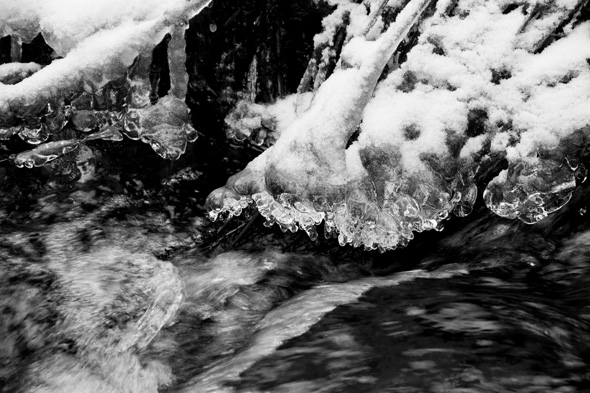 It wasn’t quiet at all times though. The sound of flowing water occasionally broke the silence and I find subjects like this irresistable. 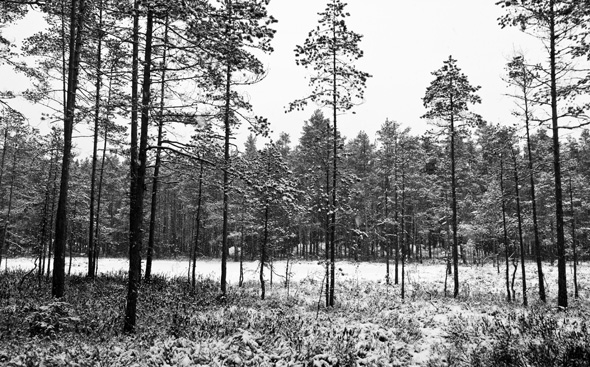 Maybe it’s the strange feeling of belonging or being part of something that attracts me. Biologists and geologists have academic explanations to the things we see and experience, but there is something special that cannot be explained, a certain feeling of taking part in something partly beyond our understanding. Could this be the explanation why I enjoy it so much?

Just another minimalistic one 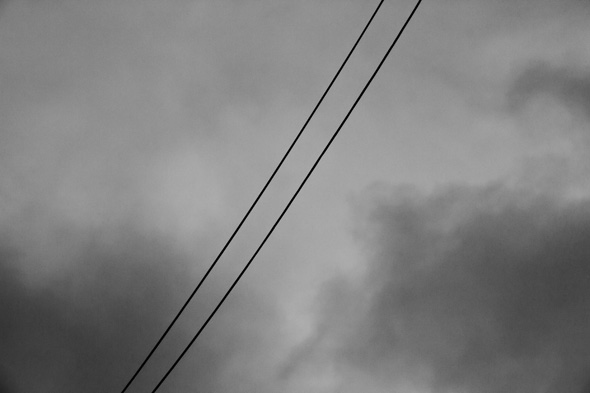 No winter in sight yet and, honestly, I don’t miss it either. What I do miss is the daylight and the sun. This is what the sky looked like earlier this week (ok, the image is slightly manipulated). 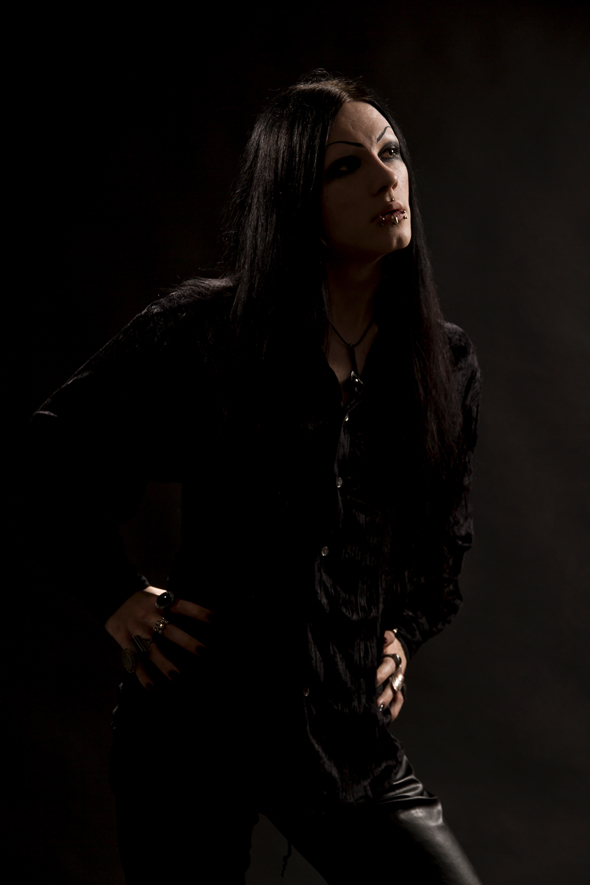 The last days in October gave me an opportunity to do three different sessions in three very different styles. The first session I did was with the Alternative/Gothic model Xilmordas. I had never done anything like this before, so it was all new to me and very exciting. I had a vague idea of what I wanted to try and also to make the pictures look a bit different to what many others do in this field. 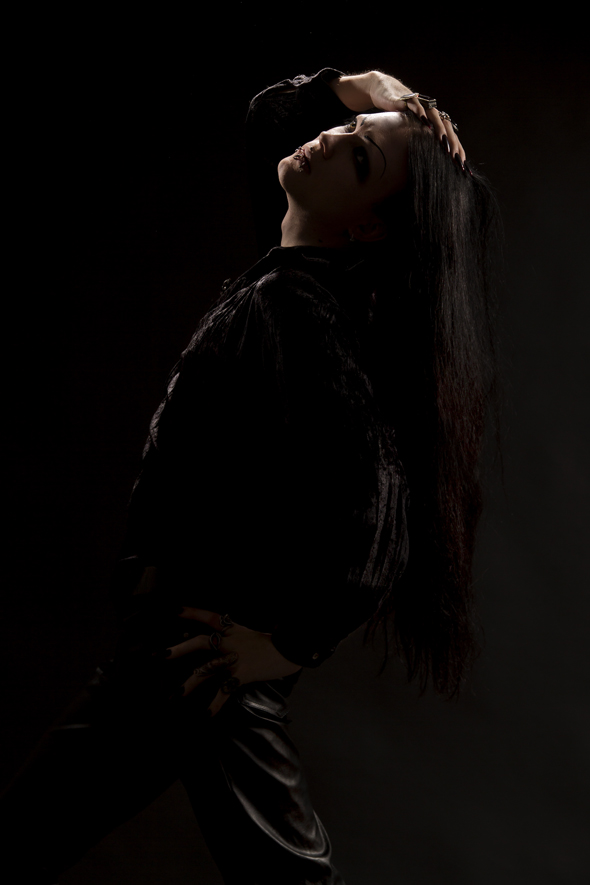 I didn’t want to make him look like some kind of cartoon with loads of make up and a scary face. Instead, I thought that this look is something he has chosen and I must respect that decision by doing my best to show the style and follow some of the foundations of portraiture. Looking at the result, it is very clear to me that there is much to be discovered within that style and getting out of the comfort zone and try new things out is good for my photographic development. 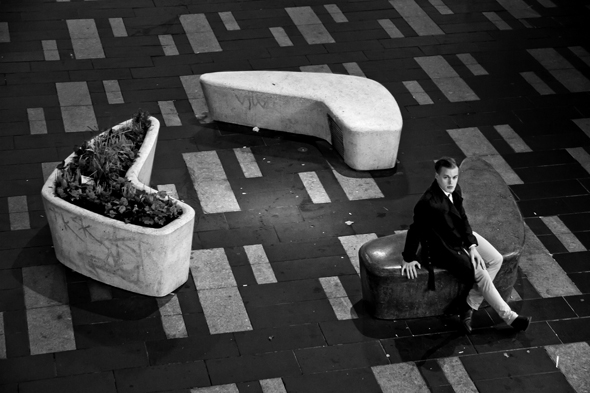 Time for a night shift! I have seen many night shots and liked them and now I wanted to find out if I could do it and get my touch. Raphael agreed to meet me down town late in the evening and we strolled around for about two hours. It was a rather cold night, but we thought it was worth it. 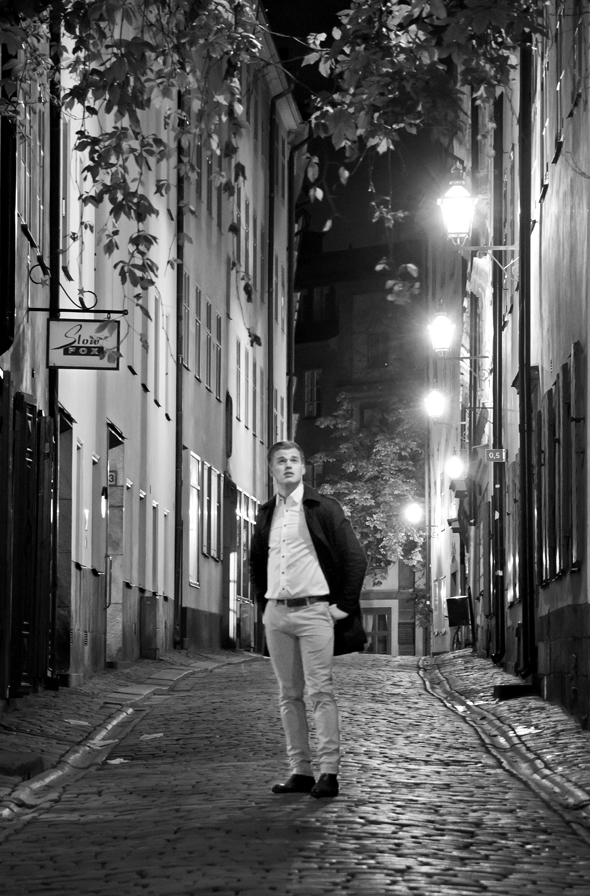 I had done some tests a couple of weeks before the actual shooting (without model) and found that it could work and after that I felt we could actually get a couple of pictures worth looking at. 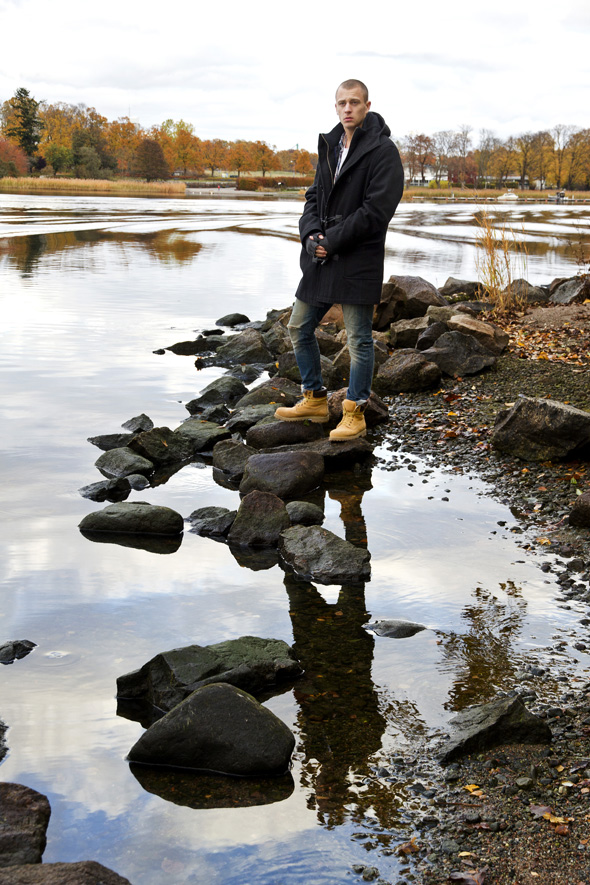 Home and get a couple of hours sleep before it was time for the next session, this time with Viktor, who happened to be at home, as model. We wanted to try some “moody” pictures, but also took the opportunity to talk about many things between the shots. 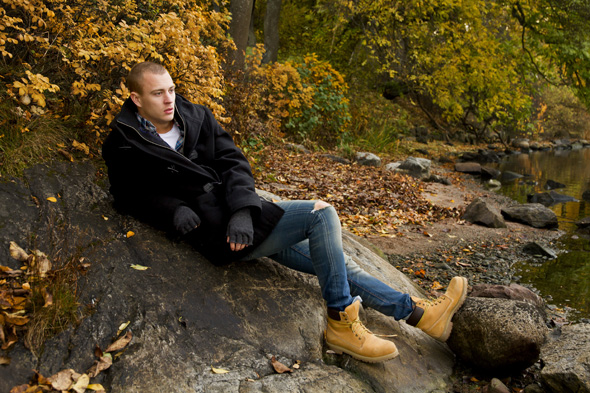 We took a walk through the city to the Central Station afterwards. Last time we worked together was about seven months ago, so we had a lot to talk about. Three different sessions, three different styles and loads of photos to post process. I guess it’s good for the development.

The world we live in 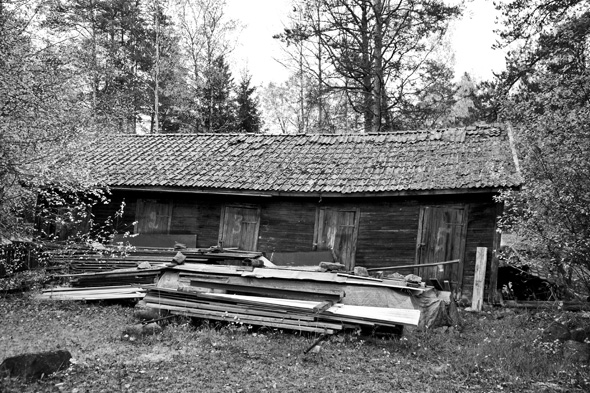 There are occasions when I wonder what’s going on here. As you probably are aware of, the situation in the Middle East is anything but satisfactory and the consequence is that Europe is currently being “invaded” by refugees from Syria, Iraq and Afghanistan. There will be many problems along the road, but have we ratified international conventions, we better keep our word and should try to make the best of the situation. The way things are now means that we must all try to help and do what we can to solve the problems and issues. There are a couple of countries within the European Union that try to sneek away from their responsibility to share the burdens equally and that is not ok.

There are, of course, voices that advocate that we receive refugees and claim that “Sweden is already full”. Freedom of speech is protected by law and we are all entitled to have an opinion, but there are a few who go far beyond their rights and demonstrate what they think by burning down possible refugee lodgings. A real low mark was hit last week when someone set a refugee lodging which was in use. Luckily nobody got injured but such behaviour is frightening.

Another tragic thing happened in a school in Trollhättan last week, a school where many young immigrants studied. A young Swede, only 21 years of age and full of hatred, got in to that school with the aim to kill with a sword and knives. Four persons died from that attack, including the offender and social media are doing their best to keep the fire burning.

Despite this, I still prefer to be naive and believe that mankind is good and hope that everything will settle in due time. If not… well I guess we will all look like the house on picture to this post.